“Enhancement of Căpriana Monastery for the Promotion of the Unique Ecclesiastic Heritage by Cross-border Cooperation and Digitization, acronym EnCaMo.”

Funded under the Joint Operational Program Romania – Republic of Moldova 2014-2020, thematic objective 3, priority axis 2.1, through the European Neighborhood Instrument (ENI). The duration of the project is 18 months.

“Moldova” National Museum Complex (CMNM) Iași, Romania and Căpriana Monastery, Republic of Moldova, sharing the same concern towards preserving treasures of spiritual and cultural heritage values, started the implementation of the project Enhancement of Căpriana Monastery for the Promotion of the Unique Ecclesiastic Heritage by Cross-border Cooperation and Digitization, 2SOFT/2.1./76, acronym EnCaMo.

The project has a duration of 18 months and is financed under the Joint Operational Programme Romania – Republic of Moldova 2014-2020, Thematic objective 3 (Promotion of local culture and preservation of historical heritage), Priority 2.1 (Preservation and promotion of the cultural and historical heritage), through the European Neighbourhood Instrument (ENI). The total value of the project is of EUR 109,760.00, out of which EUR 97,760.00 represent the EU funds and EUR 11,000.00 the co-financing of the two institutions.

The idea of setting up a museum within the Monastic Complex of Căpriana, that would protect and valorize,  from a museum perspective, the archaeological liturgical artefacts which belonged to Metropolitan Gavriil Bănulescu-Bodoni, occurred throughout the years that these artefacts were in a process of conservation-restoration at the Centre for Research and Conservation-Restoration of the Cultural Heritage within ”Moldova” National Museum Complex of Iași, Romania.

The partnership between ”Moldova” National Museum Complex of Iași, Romania and Căpriana Monastery, Republic of Moldova started in 2002, when conservation-restoration works were performed for the archaeological material originating from the monastery’s necropolis (”Assumption of Virgin Mary” Church – the oldest church within the monastic complex) following the archaeological researches coordinated by Prof. PhD. Hab. Gheorghe Postică.

The project aims the conservation, valorization and tourist promotion of the unique ecclesiastic heritage, with a historical value, discovered in 2016, on the occasion of archaeological researches carried out at Căpriana Monastery, Republic of Moldova, in the context of the canonization of Metropolitan Gavriil Bănulescu – Bodoni.

This common transnational cultural heritage will be the base for the foundation of the first religious museum in the Republic of Moldova, on the premises of Căpriana Monastery and will constitute the subject of a permanent digital exhibition within ”Moldova” National Museum Complex of Iași, with a view to increasing by 20% the number of tourists to visit the newly founded museum within 24 months since the project implementation.

The target group of the project is represented by the staff of religious institutions, museums, tourists, tourism agencies as well as the general public, indifferent of the age, religion, education, coming from the two partner countries.

The project’s end beneficiaries will be represented by the monastic staff of Căpriana Monastery, as well as by all those involved in the field of conservation, restoration and promotion of the cultural heritage in the Republic of Moldova. Likewise, various categories of audience will benefit from a new and unique museum in the Republic of Moldova and from a permanent digital exhibition in Romania, which will give them access to an archaeological ecclesiastic heritage through modern and interactive elements of museum technique.

This material was produced with the support of the European Union. The content is solely the responsibility of the National Museum Complex, Moldova ”lasi, Romania and cannot be considered, under any circumstances, as reflecting the position of the European Union or the Joint Operational Program Romania-Republic of Moldova 2014-2020. 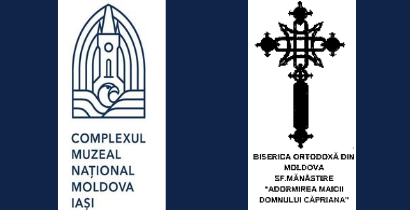